In Stock, the first 50 copies of Pokémon Legends: Arceus come with an Arceus V physical bonus card, on a first-come, first-served basis, while stocks last.

Players who preemptively purchase the boxed version of "Pokémon
Legend: Arceus" will receive a bonus card "Arceus V" that can be used in the Pokémon card game as a bonus.
※The number of bonuses is limited, while supplies last.
※The download version does not come with a bonus card.
※The card is only available in traditional Chinese.

Due to the different countries where the product is supplied, the packaging cover of the product will be different. The goods are all original and new, the game content is the same, and language switching is supported. 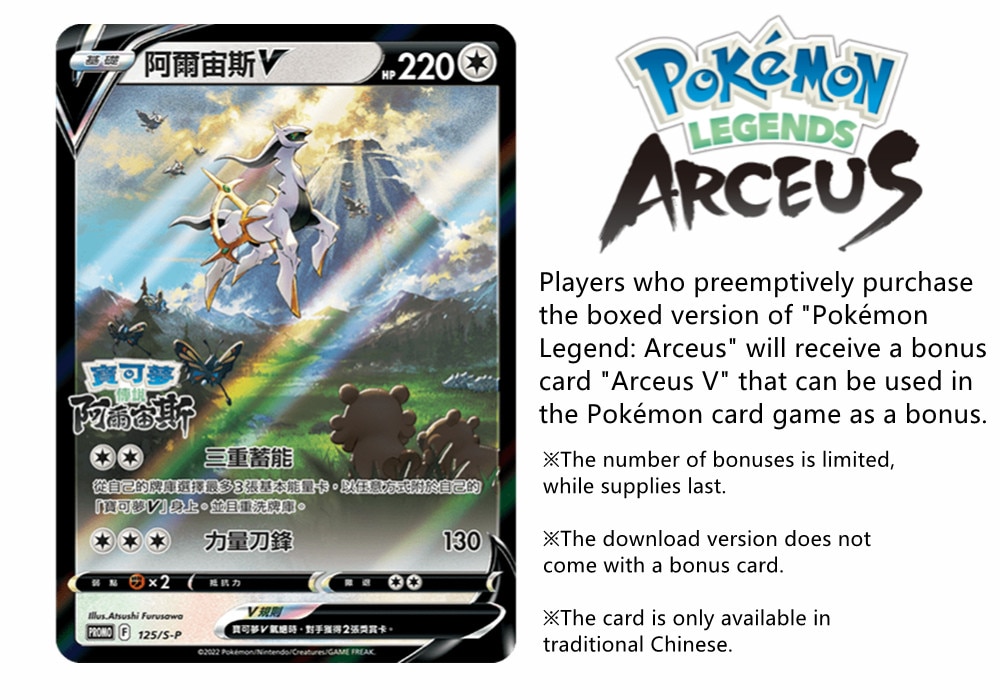 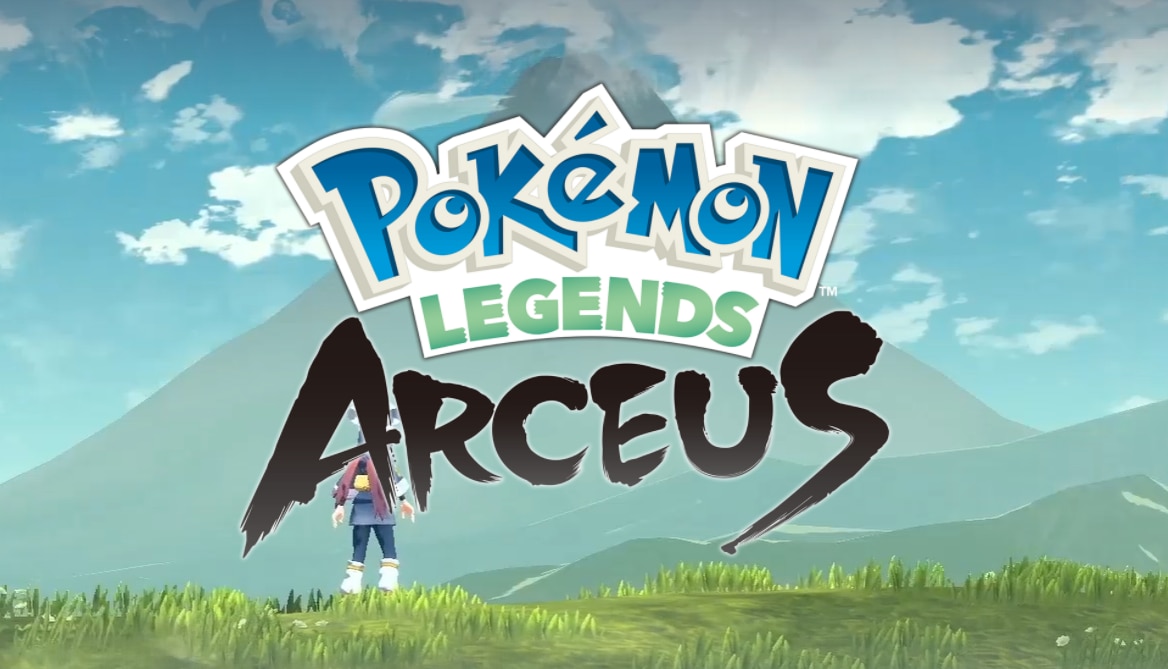 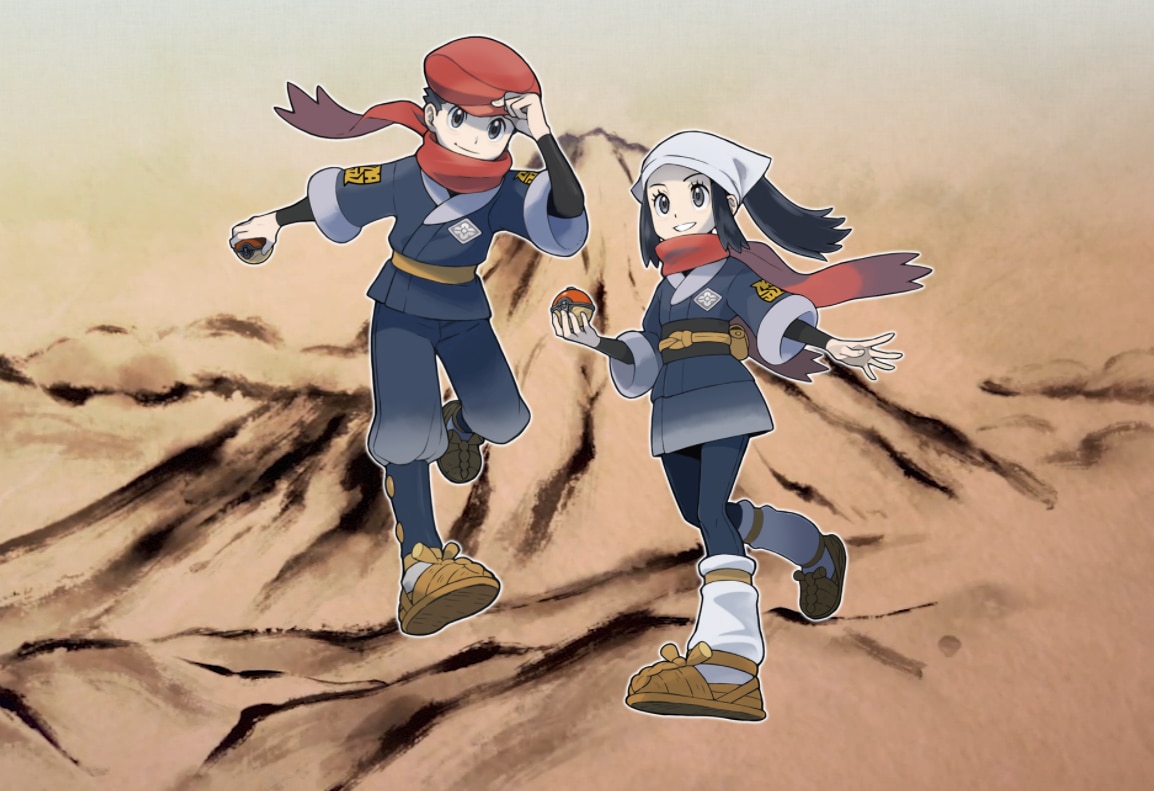 Encounter and battle Pokémon in the Hisui region of Pokémon Legends: Arceus. 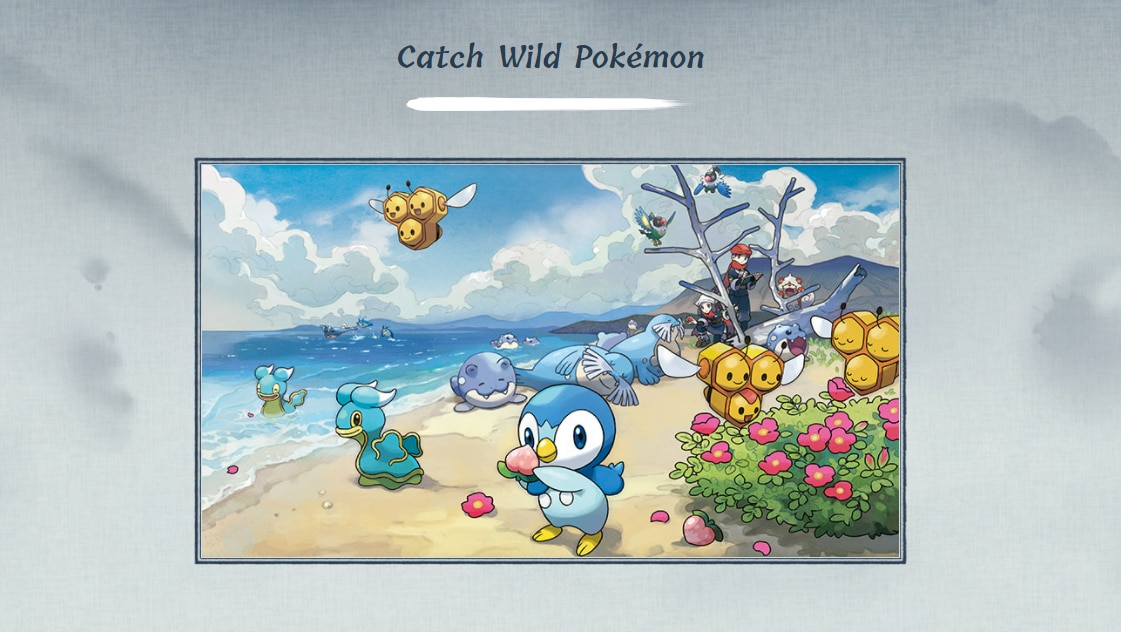 Pokémon live freely in all kinds of places—in grassy fields, in forests, or out on the water, to name a few. There may be certain Pokémon behaviors—or even entire species—that you witness only under the right conditions, such as during a particular time of day or in certain kinds of weather. 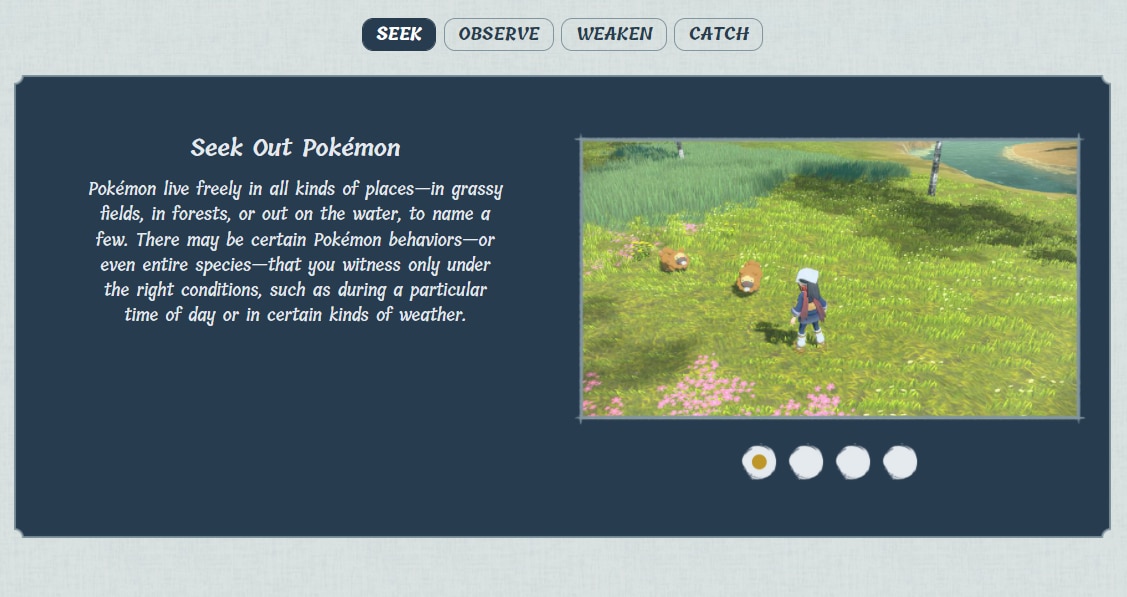 Observe Pokémon to Learn Their Dispositions

Wild Pokémon will react to you in different ways depending on the species. Some may come right at you and attack, while others will run away as soon as they spot you. Tailoring your approach to Pokémon’s dispositions will be the key to successfully catching them. 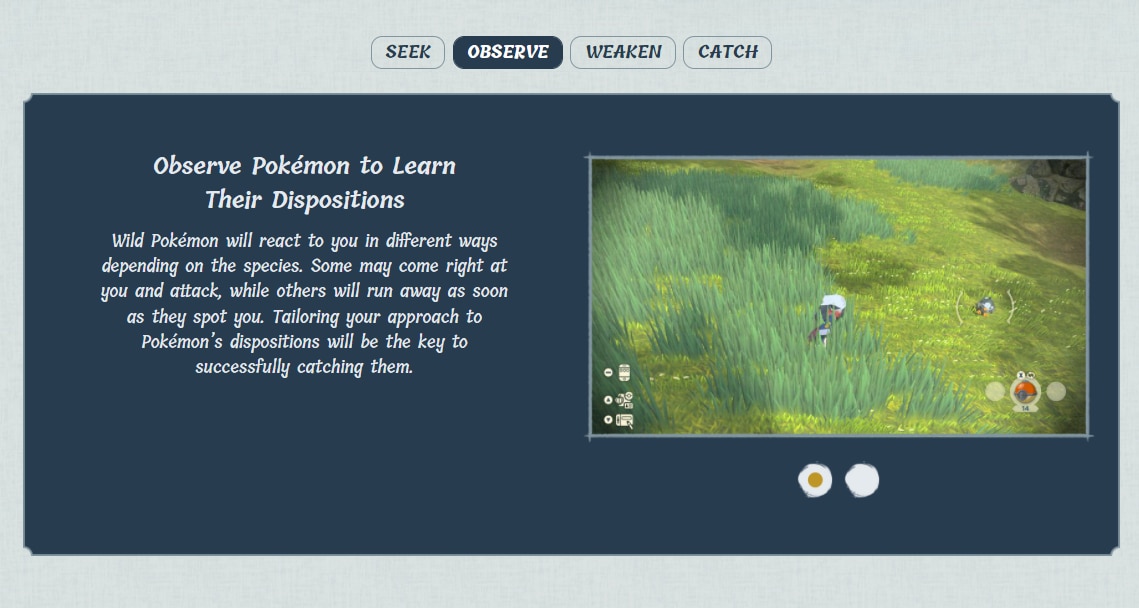 Weaken Pokémon in Battle to Catch Them

Battle can be a critical step in catching some Pokémon. Wild Pokémon become easier to catch after they’ve been weakened in a battle. 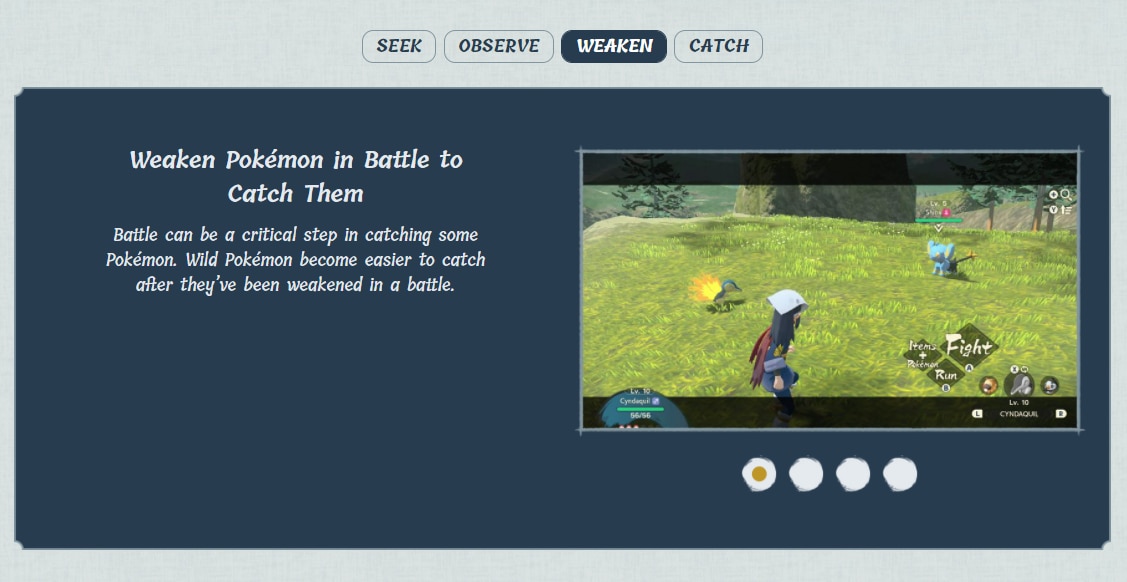 You can try to catch wild Pokémon by throwing Poké Balls at them. When you find a Pokémon that you want to catch, get close to it, then try to catch it using a Poké Ball. Aim carefully at your target, and hit it with your ball before you miss the opportunity! If the wild Pokémon doesn’t pop right back out of the Poké Ball you hit it with, then you’ve done it! That’s a successful catch. 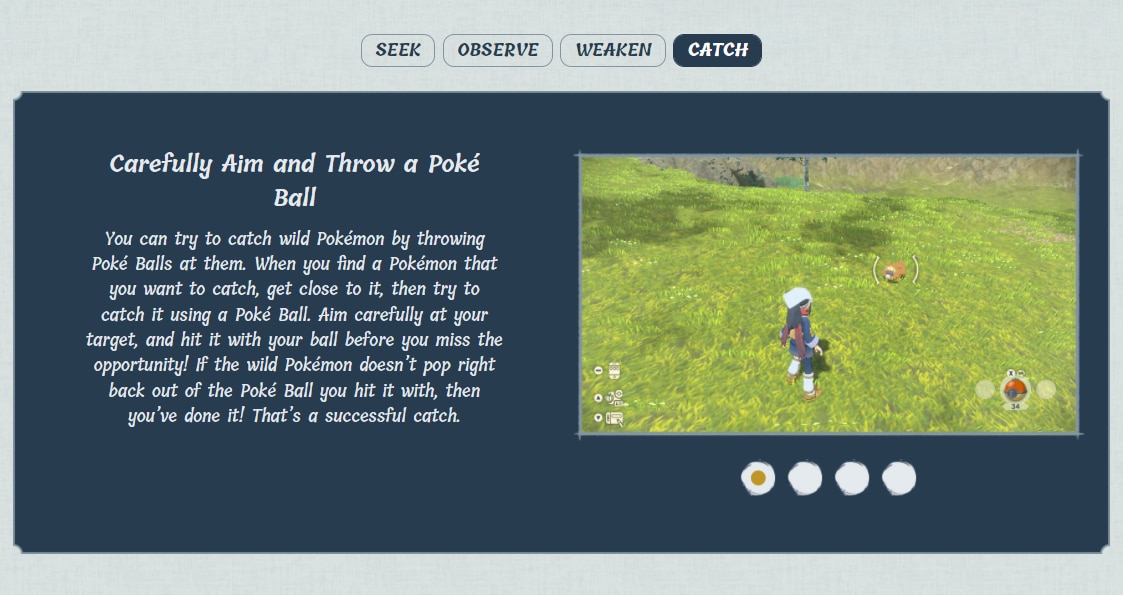 You can find Pokémon in unexpected locations, such as up in trees or in the crevices of rocks.

How to Start a Battle with a Pokémon

If you throw a Poké Ball™ containing one of your Pokémon at a wild Pokémon, a battle will begin. You’ll enter battle seamlessly, rather than switching into a battle-specific screen as in previous games in the Pokémon series.

Time for a Pokémon Battle!

The flow of battle in Pokémon Legends: Arceus works differently than in prior games in the Pokémon series.

In past games, battles have proceeded one turn at a time, with each participating Pokémon typically taking one action per turn. In Pokémon Legends: Arceus, Pokémon’s stats and other factors determine how many actions each Pokémon gets to take and in what order.

This can create situations where one Pokémon might get to take multiple turns in a row. You could heal your Pokémon immediately after dishing out an attack or throw yourself all-in with a no-holds-barred flurry of attacks.

The Challenge of Facing Alphas

During your expeditions, you’ll sometimes run into alphas: Pokémon that are larger than normal and have glowing red eyes. Alphas will chase you down and attack you when they notice you. They’re tough opponents, but they’ll become great allies if you manage to catch them. They may even drop rare items if you defeat them in battle.

Pokémon can remember four moves at a time to use in battle. In this game, the moves your Pokémon can use can also be unleashed in two new ways: agile style and strong style. Use these different styles skillfully to gain the upper hand in battle!

Using a move in the agile style raises the user’s action speed, which may make the user’s next turn come sooner, but lowers the move’s power.

Using a move in the strong style raises the move’s power, but your Pokémon’s action speed will be lowered.

Pokémon Battles against Other People

The mingling of people and Pokémon is still not the norm in the Hisui region. People who live alongside Pokémon are rare, and people who lead their Pokémon in battle are even rarer. However, some people—such as certain wardens—have forged strong bonds with Pokémon and may challenge you to a battle. 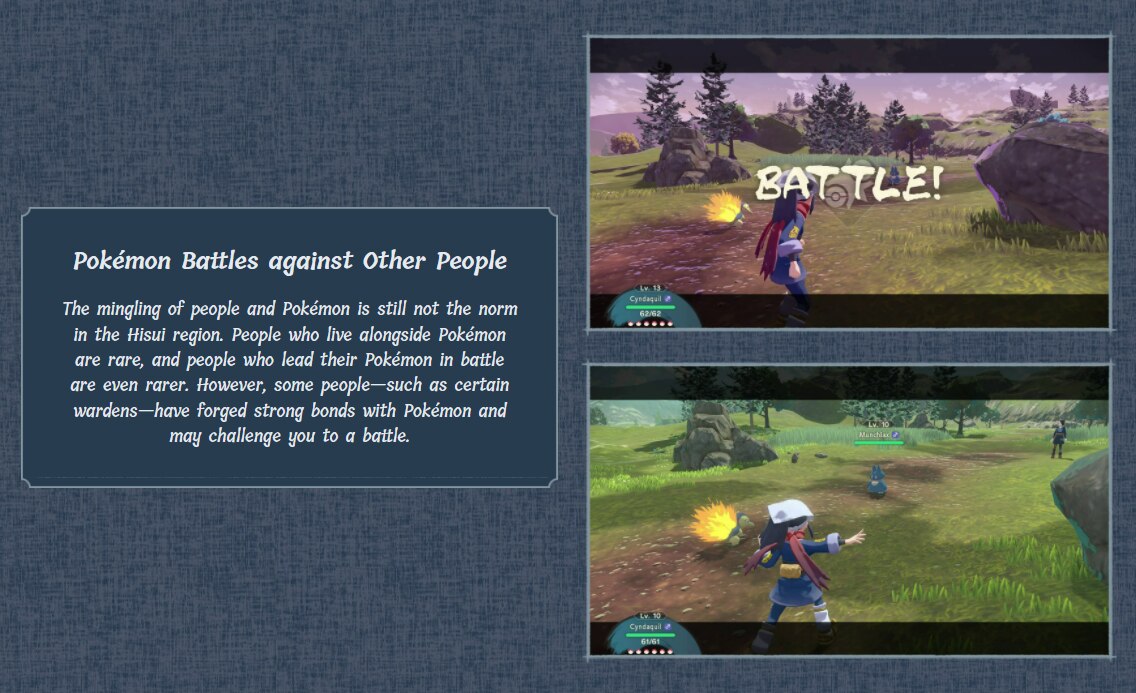 How to Complete the Pokédex

You add information to your Pokédex by catching Pokémon. But catching a Pokémon once won’t be enough to complete its Pokédex entry!

You’ll need to keep studying that Pokémon and complete research tasks to increase your research progress on it and flesh out its Pokédex entry.

Completing these research tasks will also contribute to your work with the Galaxy Expedition Team and raise your rank as a team member, granting you access to new areas. 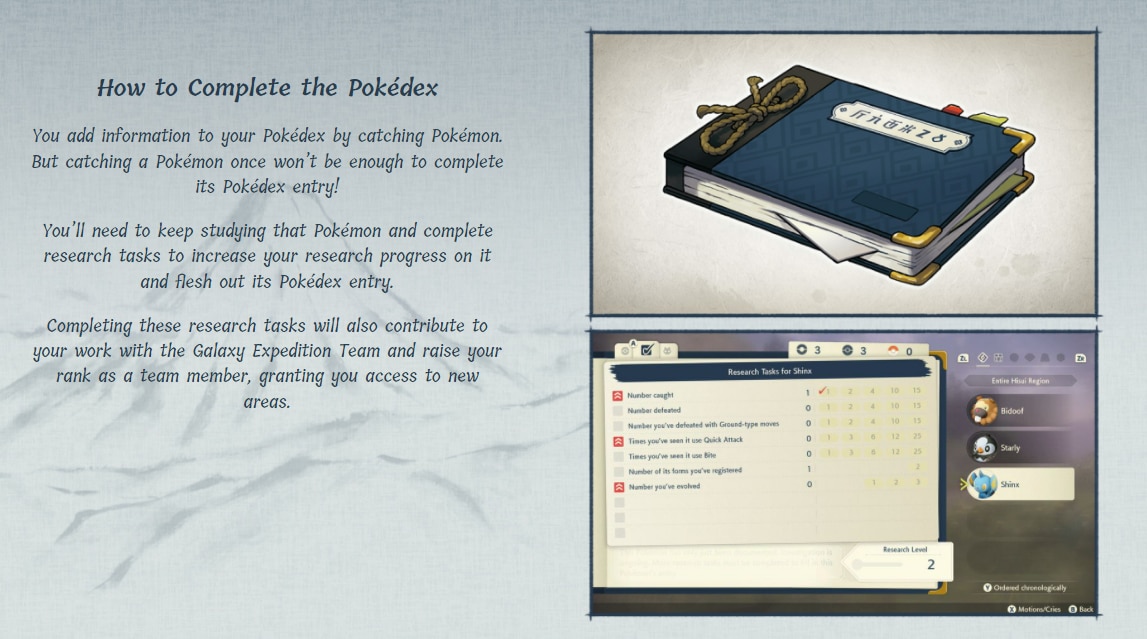 Whenever you leave Jubilife Village to set out on an excursion, your first stop will be one of the base camps that will serve as a handy outpost for your work. You can stop by for a rest during an excursion, letting your team of Pokémon recover their health, or you can use a camp’s workbench to craft some items.

You may become unable to go on with your survey if you take too much damage, whether it’s caused by wild Pokémon attacks or falling from high places. If you get into danger, don’t be reckless—use your base camps to full effect as you carry out your survey work!

During your adventure, you’ll receive a Celestica Flute. You can play the flute to summon special Pokémon that will let you ride them. Riding these Pokémon on land, across water, or even through the skies will help you more freely explore the Hisui region.

Wyrdeer has powerful, sturdy legs, and riding it will allow you to gallop across the land at great speed. By having Wyrdeer dash forward, you’ll be able to give yourself an even greater speed boost. You can also have it jump to leap over obstacles.

Basculegion will be a powerful ally when it comes to completing your Pokédex, as it can carry you across bodies of water. Basculegion is also able to launch itself from the water’s surface, letting you leap effortlessly over obstacles in your way.

Hisuian Braviary will let you soar through the skies, flying with ease across great chasms and expanding the ways you can travel and explore the region. From your vantage point in the air, you’ll have a great view of what kinds of Pokémon and items might be below, which will aid you on your surveys.

As you’re exploring, you’ll collect all kinds of materials that you can use for crafting—combining items to make new ones. For example, if you combine an Apricorn and a type of stone called a Tumblestone, you’ll be able to craft a regular Poké Ball.

You can craft items using the workbenches found at base camps and in Jubilife Village. 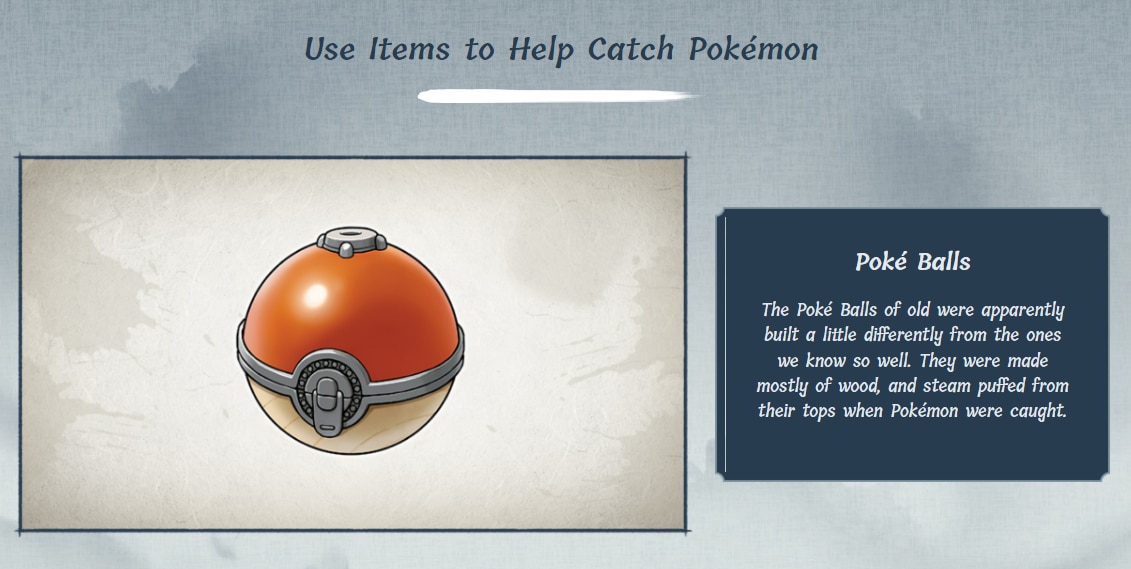 The Poké Balls of old were apparently built a little differently from the ones we know so well. They were made mostly of wood, and steam puffed from their tops when Pokémon were caught.

When thrown, these balls create a cloud of smoke that reduces visibility in the area, which will keep wild Pokémon from noticing you. They’ll be a great aid in stealthily approaching Pokémon in areas where there are no rocks or other obstacles to hide behind.

Heavy Balls are a special variety of Poké Ball that are more effective at catching Pokémon that haven’t yet noticed you. They’re heavier than regular Poké Balls, so they don’t fly very far. You’ll want to make sure you sneak close to a Pokémon before using one of these!

Your Arc Phone Will Be Your Guide

Early on in your adventure, you’ll receive a device called the Arc Phone. Its distinctive appearance might lead you to suspect it has some connection to the Mythical Pokémon Arceus. This device appears to contain some sort of strange power, and it seems it will help guide you on your journey.

The Facilities of Jubilife Village

In Jubilife Village, there are facilities that can help you have even more fun on your adventure.

Get Just the Right Look at the Clothier and the Hairdresser

You can change your outfit and hairstyle in Jubilife Village. At the clothier, you can obtain everyday kimonos as well as fancy suits, hats, and even masks. Get your hair styled and colored at the hairdresser’s. Mix and match your clothes and hairstyle to create just the right look for you. 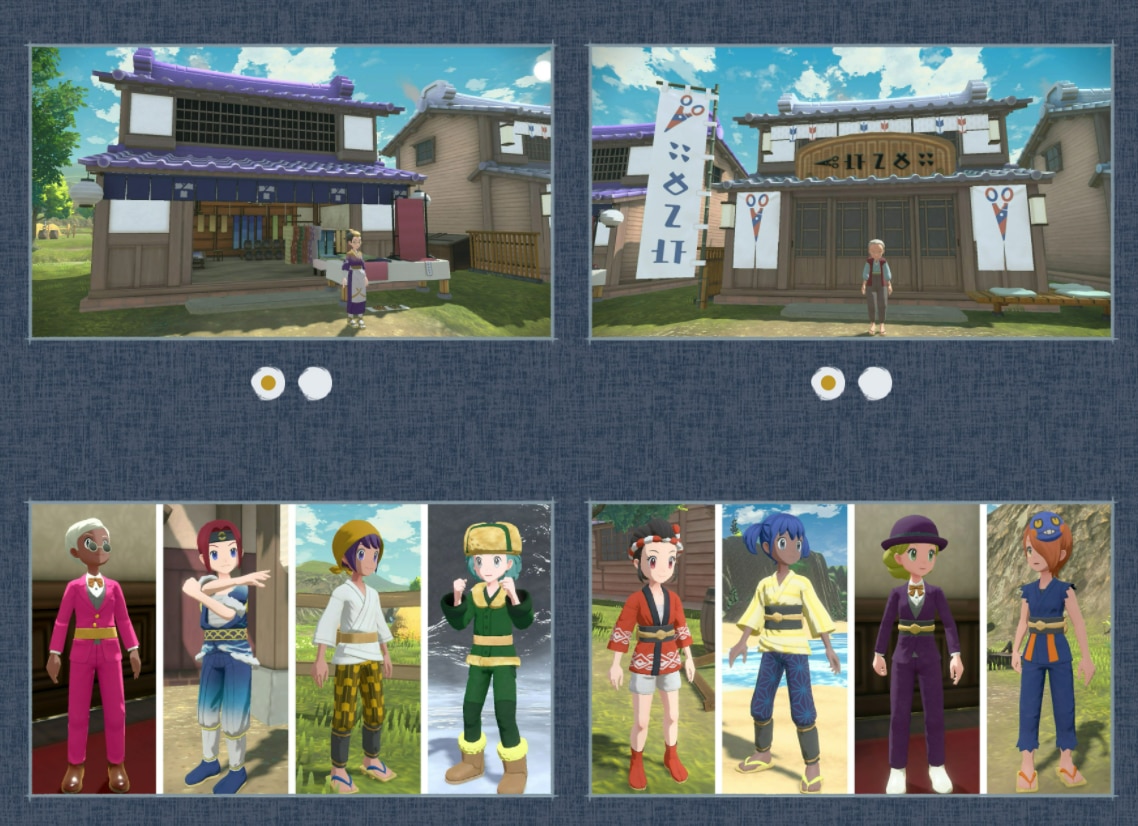 Take Pictures at the Photography Studio

The photography studio is where you can take pictures with your Pokémon. Change the background and the look of the photo. Strike different poses and make different faces. Even the same Pokémon can produce wildly different photos, depending on your creativity.

There are no reviews yet.

Start the game to reveal your prize

Pick a gift to see what you've won

Your Discount Code Is: PBHAPPYCUSTOMER

Not your lucky day! Next time you'll win!